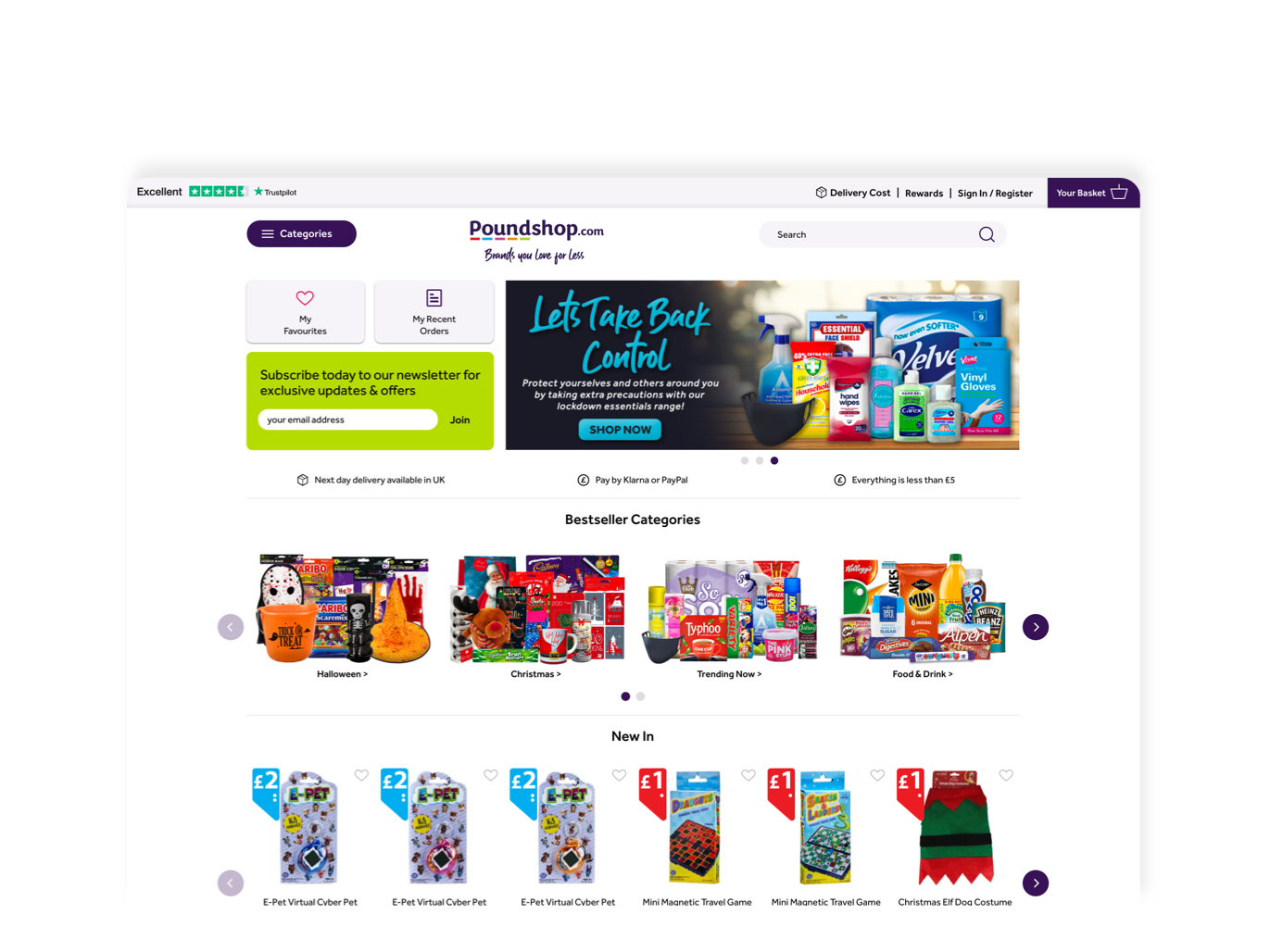 Founded in early 2014, Poundshop.com’s ethos is centred on consumer value. Tailoring the ‘everything for £1’ concept that has worked so well on the highstreet to meet the needs of the online consumer, Poundshop focuses on the 5 price points of £1 - £5, delivering a value range of branded fast-moving consumer goods (FMCG) including, food, household cleaning, personal health and hygiene, confectionery and pet food, and direct to the consumer. The pandemic and subsequent lockdown provided Poundshop with a substantial set of unprecedented challenges: customer panic buying, massive increases in customer base, and the need for an increase in the speed of the website’s development.

The pandemic and subsequent lockdown provided Poundshop with a substantial set of unforeseen and unprecedented challenges. The customer panic buying that started just before March led to a massive increase in customer base, an increase that would have otherwise not been acquired for several years to come.

The significant growth first started mid-March, and led directly to an increase in the speed of the website’s development. To put into context, Poundshop had previously seen its highest order levels on Black Friday 2019 when it recorded an uplift of +320%. The value of orders taken online on Saturday 14 March 2020 (the height of the pandemic panic buying) represented a 230% uplift above Black Friday’s record, making it a +740% increase on average daily orders. What’s more, orders stayed at that level for a further 7 days to come. This left an incredible challenge for the team; wanting to satisfy that new consumer demand (ie not temporarily close the store, like was seen with many other online retailers) by keeping up with the level of order processing required that had never before been attempted, even at peak.

14 March saw a significant peak of 1,900 orders, and cerica 10K people accessing the site at one time on the Saturday alone. How did Poundshop accommodate both the server capacity and level of order processing needed?

Since the company was founded, Poundshop has used the ecommerce platform Magento Commerce, migrating through many versions and agencies, until more recently moving to The Pixel. Poundshop needed to expand and move forward quickly - The Pixel was selected as an agency that had an impressive pedigree.

Magento Commerce proved an excellent tool for handling volume. The ability for Poundshop to implement functionality quickly was imperative to success, adding extensions to help with merchandising, label creation & delivery to name just a few, helping to scale on demand. Poundshop was deployed onto Magento Commerce Cloud, and upgraded to Magento version 2.3.5, with the core objective of achieving stability and growth. The Pixel’s work methodology provided a strong foundation; utilising the company’s Agile development and sprint-led cycle allowed greater transparency and reporting, with clear deadlines in place as implementation took place.

This working method combined with Magento Commerce Cloud meant that during the surge in sales, the ecommerce site remained stable, scaling easily and efficiently with zero technical involvement from Poundshop despite rapid increases in traffic and orders at unprecedented levels. The Pixel and Magento Commerce were able to respond with increased server capacity as the traffic increased, catering and scaling to demand.

“They were upgrading the server capacity for us throughout the day whereas previously we’d have been left taking the website down because it couldn’t have coped,” says Chris Maddox, CEO, Poundshop. “It’s very automated and there’s little intervention from us apart from saying that it’s correct and can we have the increase”.

Automatic warnings told Poundshop when it was getting close to capacity and The Pixel identified whether the traffic was real. Magento Commerce could then action the increase in server capacity as required. During this period, ongoing tweaks were being performed, such as upgrades to the cloud version, database formatting, etc, adding resilience and structure.

Normally the business would take 30-35% of all revenue in October to December. Come March the business was expecting a quiet trading period, when the website got knocked sideways by the demand. In order to cope quickly, Poundshop reverted back to staff usually employed as additional workers for seasonal, holiday demand. Staff were scaled up from 1 shift working 5 days a week with normal hours, to rotated staff working 24/7 in order to support the growth in volume of turnover.

The significant amount of work done by the buying director and his team meant Poundshop had very little short supply (other than for the very high-demand items such as toilet tissue & hand sanitiser, in short supply everywhere). This was achieved by introducing buying limits very early on in lockdown to ensure fairness among customers. This was key in retaining the existing customer base that had been present pre-pandemic; ensuring regular customers could shop as normal, and stopping new customers buying in bulk, was imperative.

Homepage banners were changed to include information on how to stay healthy, supportive messages, information about why products are restricted, how to use products safely, etc. Email marketing was being sent out to an existing customer base (expanding by the day) and was the only additional marketing effort (most new customers were finding the site via Google or word of mouth), and provided a much needed information source for customers in regards to stock levels. The website recently undertook UX changes to simplify the site. Poundshop focused on telling a simpler story for customers to understand. The site was previously offering a very large product range with limited guidance. Similar to a brick and mortar store, Poundshop wanted to help customers get to where they wanted to be on site. Product ranges were simplified by halving the number on offer from 4k to 2k, and categories were reduced from 13 down to 7, helping to create a clearer journey for people to understand, allowing customers to recognise brands and make decisions faster and easier.

The pandemic forced Poundshop to leap forward with its plans to grow into a £30m - £40m business in 3 or 4 years’ time, and it is now operating consistently above the level where it had expected to be. The company had always looked to improve the efficiency of the workflows in place, and went through a steep learning curve very quickly because of the pandemic. As a result, the ability to scale and cope with unexpected demand has provided a strong foundation for the future. Moving forward the company aims to see the new level of demand as the new normal, and is looking to grow further in the peak season from where the company currently stands.

Have an existing eCommerce site or want to sell on Magento?